The plate is often a kind of auspicious pattern, which is one of the “eight treasures” of the Buddhist. “Eight Treasures” have Falun snails, Falun, treasure umbrellas, white lids, lotus, treasure bottles, goldfish, and plates.

According to the Buddhist explanation, the plate is often “returning to the loop and all bright”, which itself contains the meaning of “everything is smooth, the road is through”. The pattern itself is connected, the headless, no tail, and endless endlessness, showing the continuous sense of continuous continuity, so it is taken as auspicious rune by the people.

As a symbol of wealth and wealth, the usual applicability is very strong. For generations, Fulu inherits, live sustainable, and wealth is continuous, so that the evergreens of the tree of love can be used to express and symbolize.

Frequent patterns are widely used on furniture. The wooden windows and compartments of the northern rural agricultural houses are often carved with plates. There are also those who change their outline into gourds, and some are composed of a geometric -shaped body life.

Fang Sheng is a kind of auspicious chart. The ancients thought that eight treasures were more than eight, and their things such as jewelry, ancient money, jade, and clouds, rhino horns, red corals, Ai leaf, banana leaf, copper tripod, ganoderma, Ruyi, Fang Sheng, letting go Eight of them are “Eight Treasures”. These patterns are mostly used in ancient furniture carving and what kind of lacquer decoration.

Ruyi is a mascot that everyone is well known. It not only appears in the form of real objects, but also creates craftsmanship and traditional patterns. Ruyi ending, called “Ruyi” or “Ruyi knot”, mostly heart -shaped, dedicated, cloud -shaped. 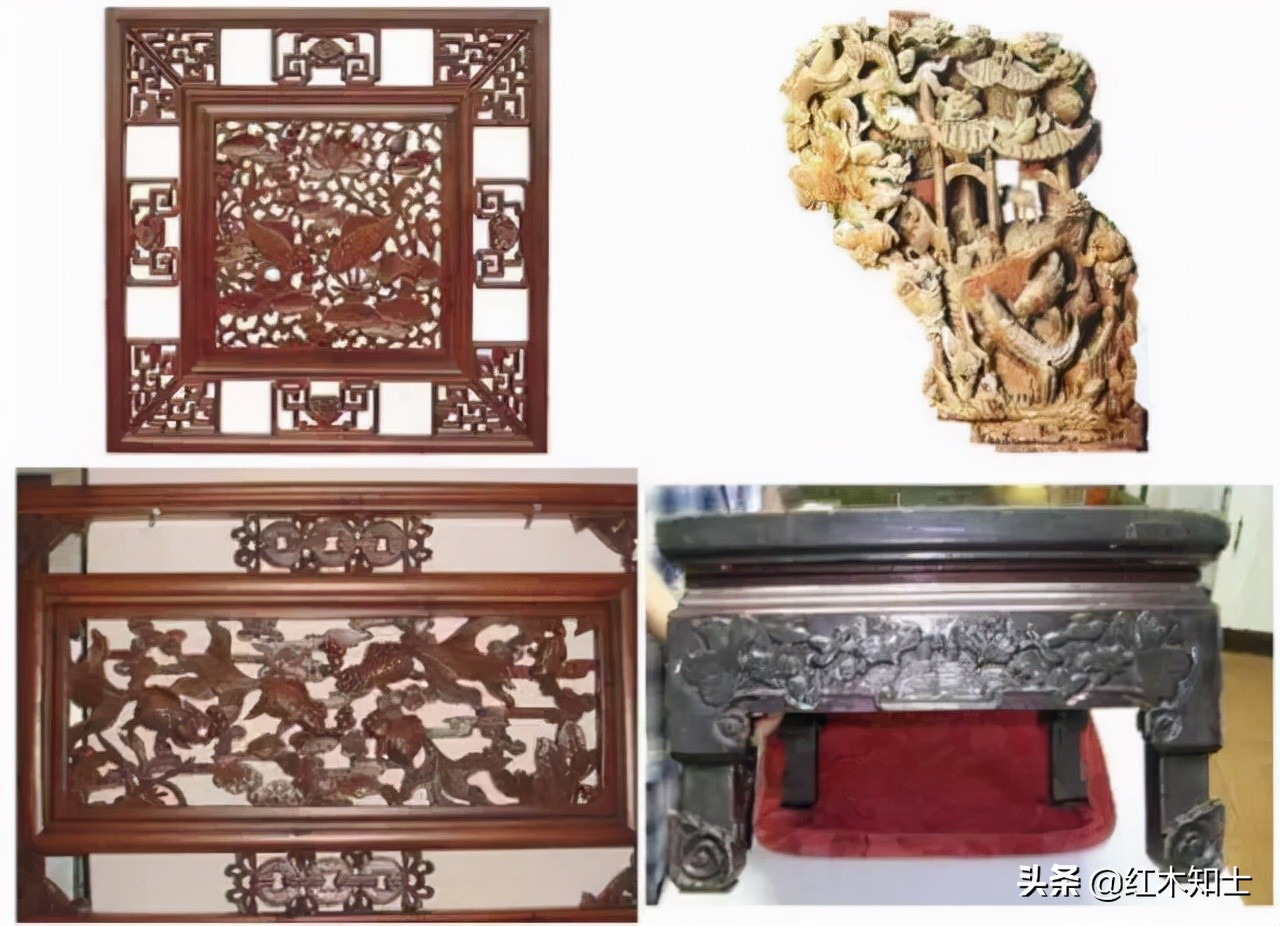 In the furniture, there are many forms on the wares; the legs and feet, back, carved or paint decorations of tables, chairs, chairs, and cabinets are widely used. In addition, there are patterns of “auspicious Ruyi” and “harmony”.

Money, ancient names, Quan, Quan and Quan’s consent, so the bats worn with two ancient money worn with ropes, called “Fushou Shuangquan”. The patterns of ancient money are mostly manifested in the sculpture of the tables and the eight -fairy tables.

There are three types of ancient bottles, one is the drawer; the other is the cooking utensils; the third is the wine vessel, which is used for furnishing porcelain vases that became popular after the Song Dynasty. , Take the meaning of “peace”. 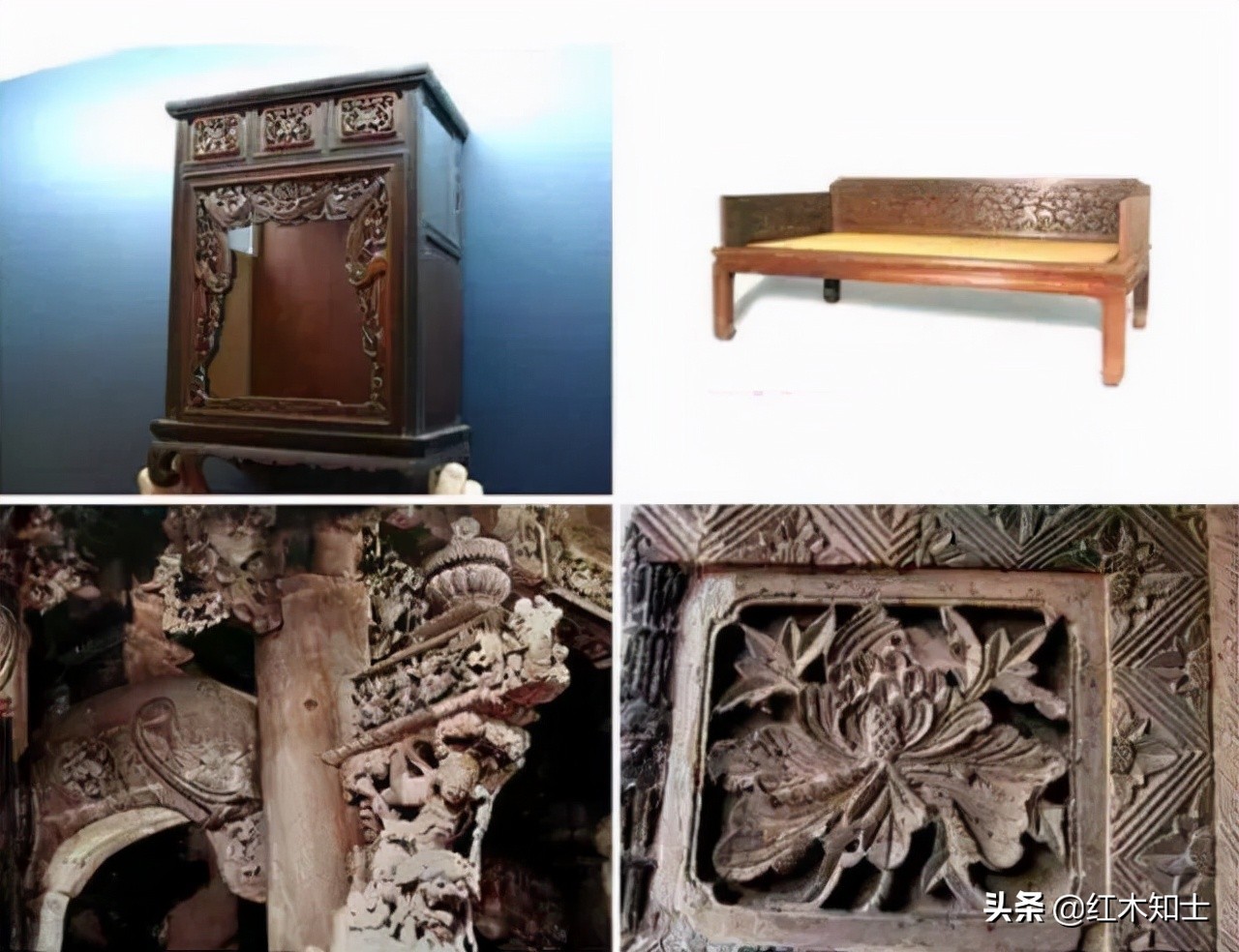 If the bottle is inserted in Ruyi, it means “safe and happy”; the vase is inserted into the three halberds, and it is paired with Lu Sheng next to it, called “flat -lifting three levels”; The bottle also has a formal pattern, such as the form of the half skeleton of the vase, carved on the flower plates on both sides of the mirror screen column, which is called: “掸 bottle seat”. 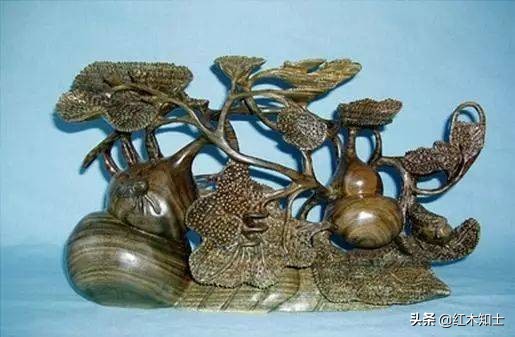 Li Tieguo’s treasure medicine gourd, legend can absorb the water of the sea.

Zhang Guo’s treasure drum and donkey and donkey, it is said that after hearing its voice, you can understand the events of his previous life.

Cao Guo’s treasure yin and yang board, it is said that hearing its voice can get back to life.

Lu Dongbin’s treasure sword, it is said that every time he encounters a monster, he can automatically get out of the demon.

Han Xiangzi’s treasure basket, it is said that it can absorb the whole sea water, with fairy peach, which can make people live long

Lan Cai’s treasure flute is called Shunfeng Flute. Legend has it that you can find a conscience thousands of miles.

The text is mostly for life, blessing, and ten thousand characters to form their patterns, and they are mostly expressed in places with seat screens, hanging screens, chairs, and other places. Or after deformation, the trend type appears as auspicious text.

“Shou” was originally a Chinese character. Some people calculated more than 300 winning methods. The common “Bai Shou Tu”. However, due to people’s ideas, not only the word is rich, but also the fonts have changed a lot. The theme still expresses one of the “five blessings”, and the life row is the first place.

The composition of the bat and the life character, “Duofu Duo Shou” and “Five Blessing Life” and other patterns. In daily life, these characters and patterns are often carved on furniture or wares.

“卍” is not a Chinese character, but a Sanskrit. It was originally a symbol of an ancient spell, amulet or religion. It is considered a symbol of the sun or fire. One of the symbols of happiness. Duoyou carved in furniture.

Yun is a common natural phenomenon. In the concept, the ancients mysteriously mysteriously called the clouds of “Xiangbai” in a certain situation. In the use of graphic, the clouds express the clouds are “cloud patterns”; they are composed of clouds.

The rolling maps of the cloud include the positive clouds, smoke clouds, Fengyun, Ruyi Cloud, Ganoderma cloud, wearing fog cloud, etc.; There are also “set clouds”, “Ruyi Cloud” is a twists and turns, which means that “Liuyun pattern “, Consisting of smooth rotation shape lines composed of complex and variety of strip -shaped ornaments; 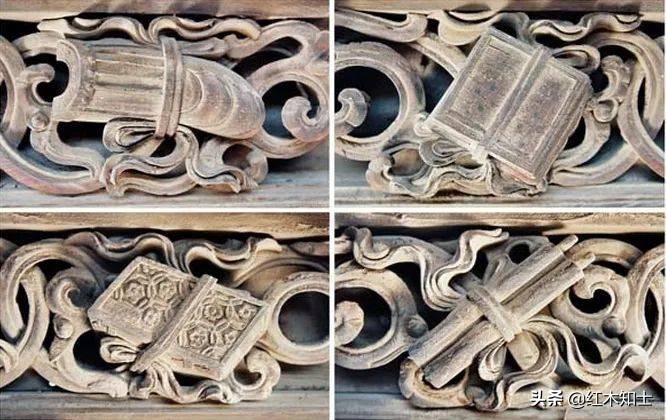 The characteristics of the back pattern are the geometric patterns composed of continuous rotation lines, including smooth “fire sickle patterns” and “Ruyi patterns”; there are oblique “hook connecting lightning patterns”. The interval is alternate; there is a square “milk diced lightning pattern”, and the milk is raised in the middle.

There is a single form in the form of the word back, which is connected to the pair and continuous strip -shaped. The two -party continuous pattern is commonly used. Those who are continuously combined in the Quartet are “back to the brocade”.

Bamboo is based on its high -clean products, which constitutes the auspicious pattern of the meaning of evergreen (clean), which is widely used in life; pine, bamboo, and plum maps are “three friends of the year”; pine, bamboo, plum, moon, and water. The pattern is called “five clear pictures”;

Bamboo is also homophonic “Zhu”, and the auspicious pattern “Huafeng Sanzhu” is the pattern of bamboo and two other auspicious flowers or two birds, which are mostly manifested on the screen. There are bamboo legs on the furniture, as well as bamboo -shaped frames carved with bamboo, and there are bamboo -like supporting chairs and tables as a whole.

Peach is called Xian Tao and Shou Tao. The themes of all birthdays are inseparable from peaches. For example, the patterns formed by multiple bats and peaches indicate “more blessings and longevity”; The pattern under the tree is called “peach peach offering life”; the pattern formed by osmanthus and peach or peach blossoms is called “Guishou Wuji”.

In addition, “Yaochi Jiqing” is inseparable from peaches. Its patterns mostly appear on the carving of the lintel and panels.

Pomegranate as a mascot is a symbol of multi -child and blessed. Such as “Hundred Soning”. The bergamot, peach, and pomegranate are also called “Huafeng Sanzhu”.

Mei is called four virtues: “The newborn is Yuan, the flowering is like a hung, the knot is a benefit, and the maturity is a chastity.” It can be seen on the wares and furniture.

The lotus has a close relationship with Buddhism. Therefore, the Buddha’s seat is called “Liantai”, the Buddhist temple is called “Lianyu”, the monks live in “Lotus Room”, and they are called “Lotus Clothing”.

The “Lotus San Meter” in Buddhism refers to “the old man of the lotus”, “Hua Kaisa Lotus”, and “Hua Luo Liancheng”, which is used to metaphorize development and prosperity. Idols, utensils, and buildings are decorated.

There are folk patterns, “one product is clean”, “lotus hanging head”, “Ben Gu Zhirong” and so on. Mostly used for carving or paint on the furniture panels. 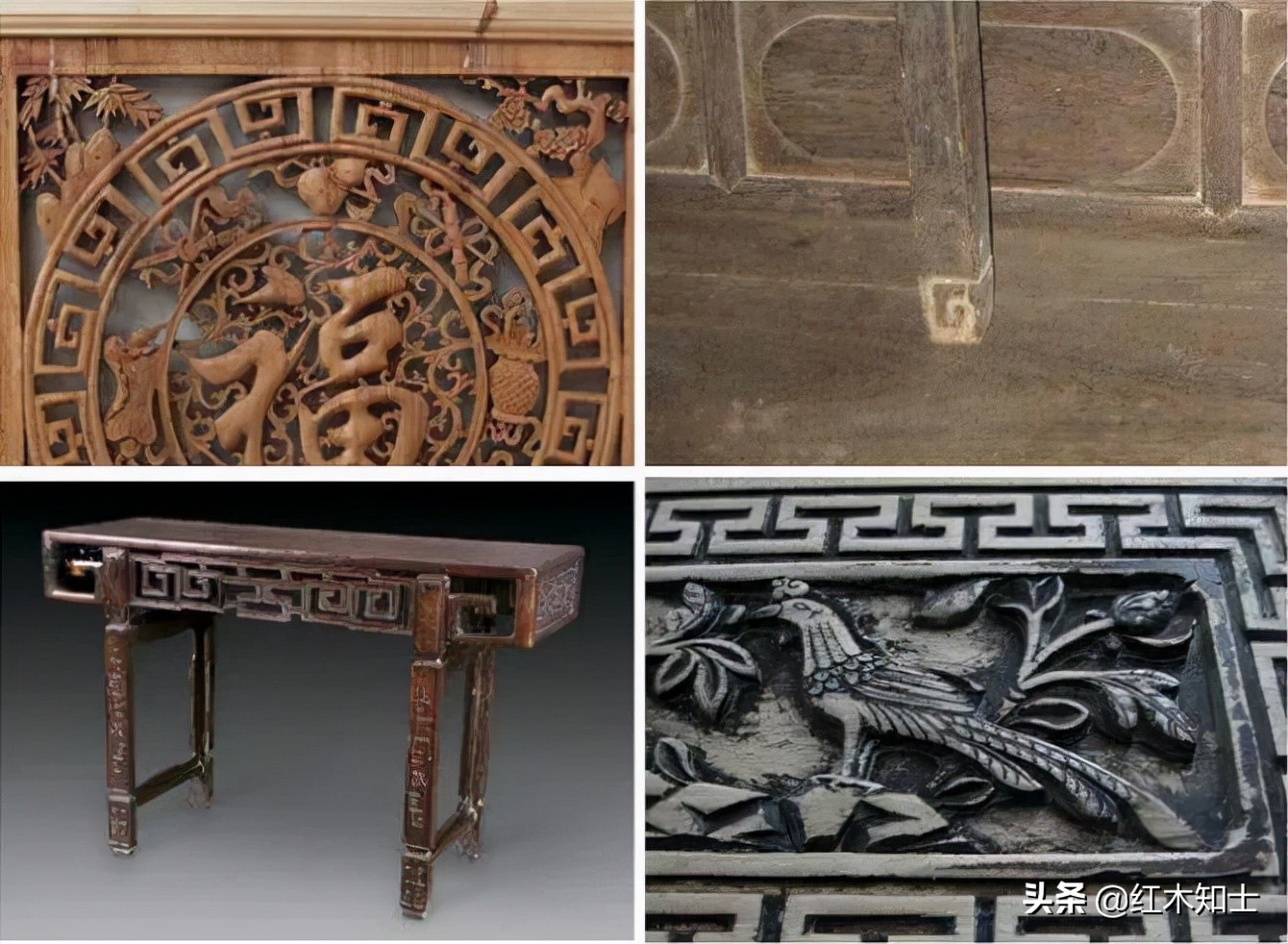 The peony people are called Huayang, the national color, and the rich and rich flowers. Therefore, it is often used as an important subject of auspicious maps;

In addition, Peony, Shoushi and Peach Blossoms are “long -lived and rich”; peony and narcissus indicate the wealth of the fairy; the peony and ten ancient money indicate “the rich and rich”. These patterns mostly appear in furniture and wares.

The rose, because it is often open in four seasons, it is particularly loved and heavy; the theme of the rose in woodcarving is used as the theme, one symbolizes the four seasons, and the other symbolizes Changchun; if the vase is interspersed with the moon flowers, it means “four seasons safe”;

The gourd is a vine plant, with vines stretched, fruit is full of fruits, and many grains are regarded as mascots to pray for descendants; therefore, the patterns of several gourds on the vines of gourds are called “descendants”. Therefore, it is often used in furniture carving to express people’s wishes.

People think that fish is a mascot, and most of them come from their homophonic sounds, and they are expensive with carp and goldfish. Such as a few firecrackers or children, lotus, and fish patterns, which means “more than years”; two fish are “Pisces Jiqing”;

Draw the fish scales into a pattern as “fish scale brocade”; the goldfish is flickered by its brocade scales, the manner is stable, and the ups and downs, and it is called “golden scale fairy” and “oriental sanctuary”;

Goldfish harmonious golden jade, the pattern of several goldfish is called “Golden Yumatang”; there is also “fish jumping dragon gate”, “jump” means jumping to the dragon gate as a fairy, so it is called “golden scale fairy”.

Fish is often active, Pentium, and Jiqing, which is generally used on the back of the chair.

Bao Xianghua is one of the ancient auspicious patterns. Generally, some kinds of flowers (such as peony and lotus) are the main body. The middle inlaid shape is different, and other flower leaves are different in size. 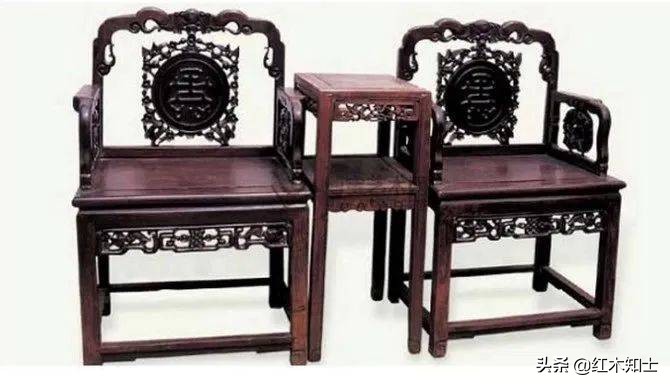 Especially the flowers and petals of the flowers are arranged by round beads, which seem to be shiny orb, plus multi -level rejuvenation, which looks like pearl and rich and luxurious. Or inlaid.

Baoxianghua has a wide range of use, and Bao Xianghua’s pattern can be seen in traditional furniture, wood carvings and paint. Bao phase patterns are mostly plane dough, but can also be seen in ellipse, irregular shapes, and stand -up carved patterns.

The common features of these plants are vines, endlessness, soft branches, and rolling leaves. Because the image of these plants is refined and changes, the rhythm of the pattern can be continuously continuous, implying that it is endless, endless, and the long and elegant.

* The article is transferred from: Internet, please inform infringement! Any issue involving copyright rights, please leave a message or inform friends in advance. We will explain or delete and pay the copyright fee for the first time!