So much road test, did anatomical diagram have seen it? Removal control for your complete dismantling display A7 driving recorder

Double 11 hours, I purchased a driving recorder, usually the same attention to this product is not high, I thought that two or three hundred dollars were very cheap, and after I saw the price of the big big name.

The product is not recommended by this site. I am not very satisfied with its work, this article is not guilty of guilty, dismantling is only the product itself. This article will not involve the introduction of its brand models and product links for the misleading of our friends. 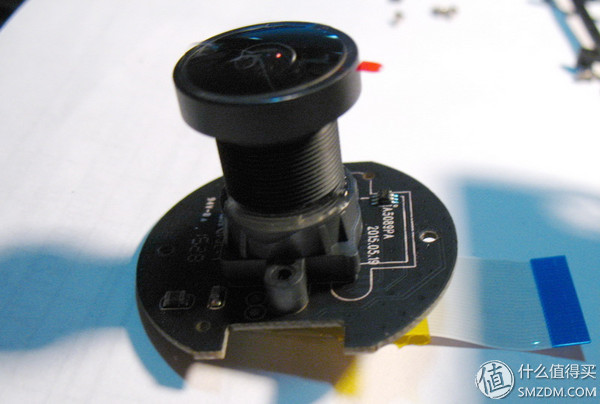 The motivation to dismantle the product is the following three points:

2. The MINI-USB charging port and video output interface I started will be soldered, and it is not tolerated for a perfectionist with obsessive-compulsive disorder. So I want to open it to see if I can reload them. 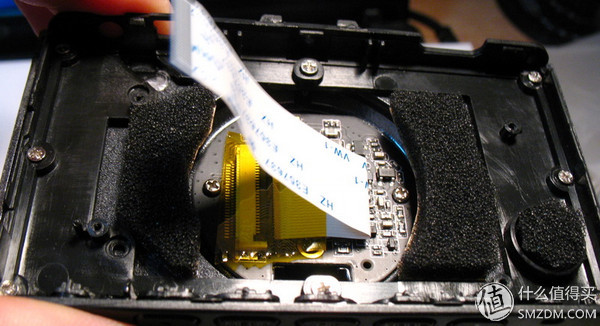 3, three or five years ago, one thousand more than one thousand, the ordinary point should be seven hundred, then there are few brands in the market. I don’t know why it has begun in the past two years, and all the gods will kill, and there is an original main industry to be a mobile phone. I have a computer, there is a black and white appliance, and I have a small appliance, even doing software. To participate in one, the price of the mainstream driving recorder also fell into the 200-300 interval. I am just a price of two or three hundred in the curios, remove material costs and marketing costs, and how much profit can attract them to grab this cake?

Turning the topic, first look at the appearance of the machine I purchased: 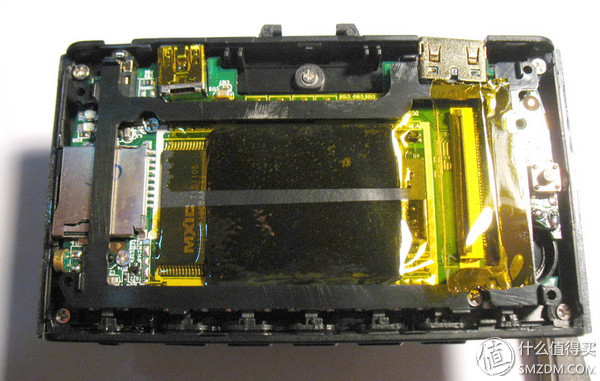 (Because all photos are shooting under the weak light conditions, it is a macro, so some photos are not very clear, the machine has been covered, it is not convenient to make up, you will look at it.)

On the picture, you can see the two interfaces, and it is the level of the cottage goods. The formal big factory has a process that will not allow factory. 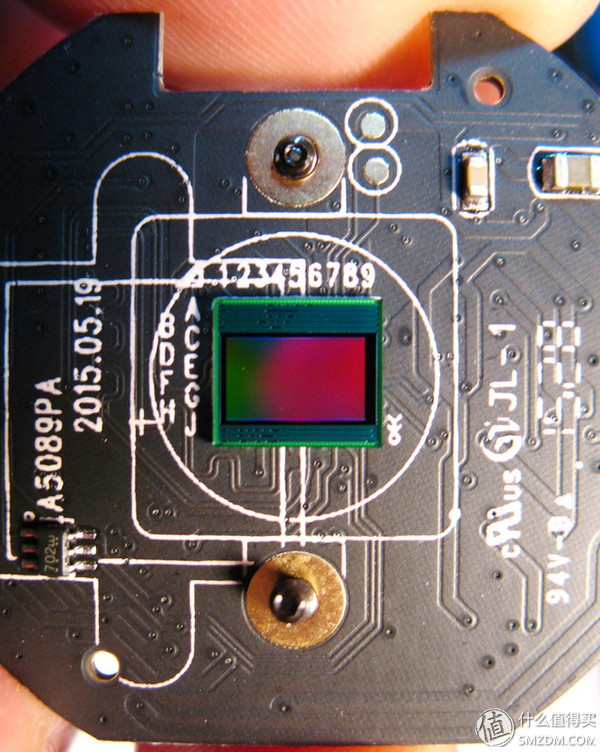 The appearance of the screen, the protective film has not been torn, so there is a little flower: 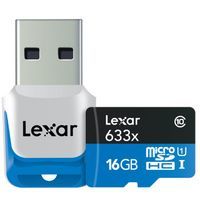 After removing the bracket, tear off the plastic film, which is actually a bronze sheet as a heat sink of the main chip: 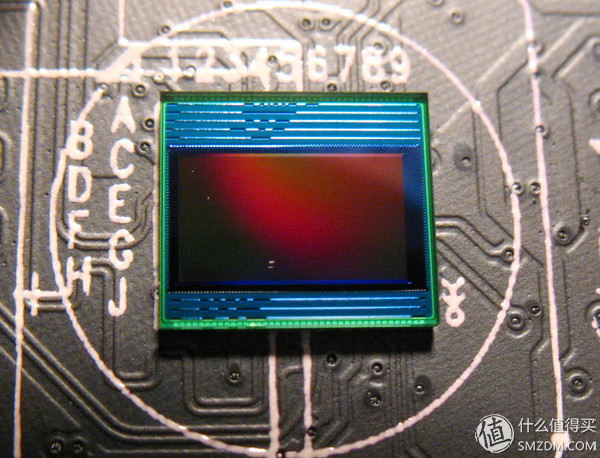 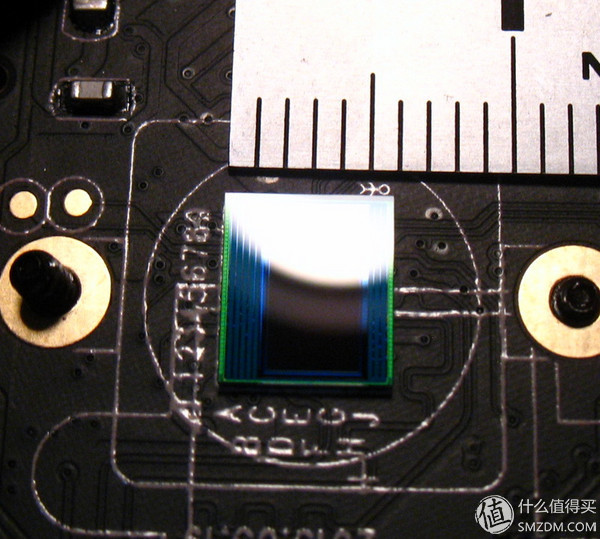 The main chip is an Anda A7LA50. The left is a Samsung 256MB DDR3 memory particles, and the model is K4B2G1646Q-BCK0. The right side is the 128MB Flash chip of Taiwan Wanghong Electronics. The model is MX30LF1G08AA-TI, which should be used to store machine firmware. 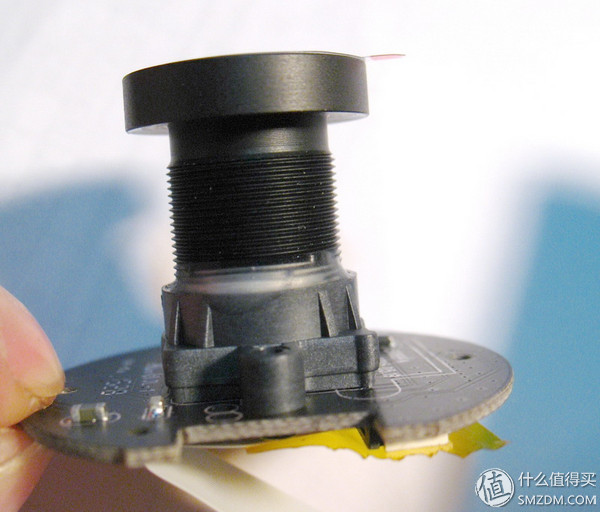 Back surface of the motherboard: 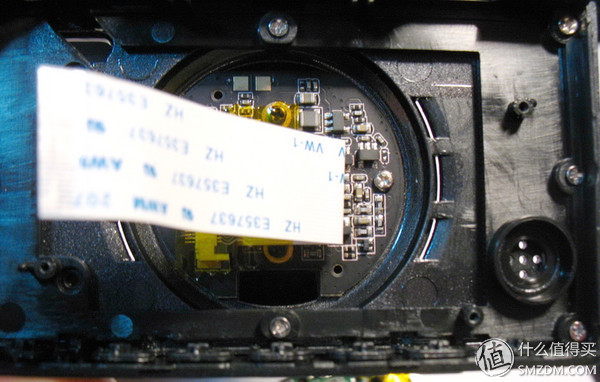 The manufacturer introduces 250mAh, the actual shrinkage of 200mAh lithium polymer batteries, I don’t know how to use it for a few minutes. 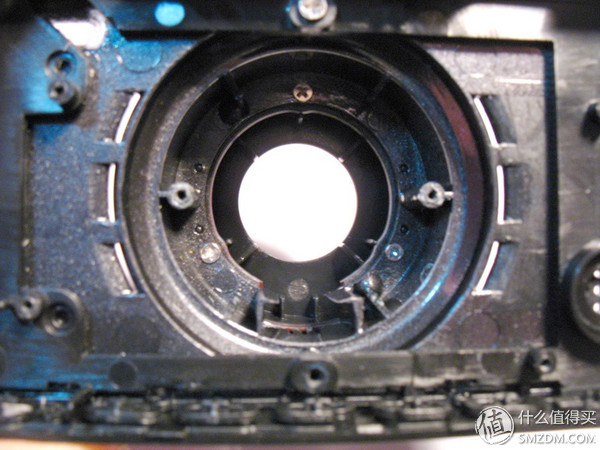 The lens module is placed on a separate circular board, which is separately fixed in the plastic lens shell:

The circuit below the cable is discrete small components: 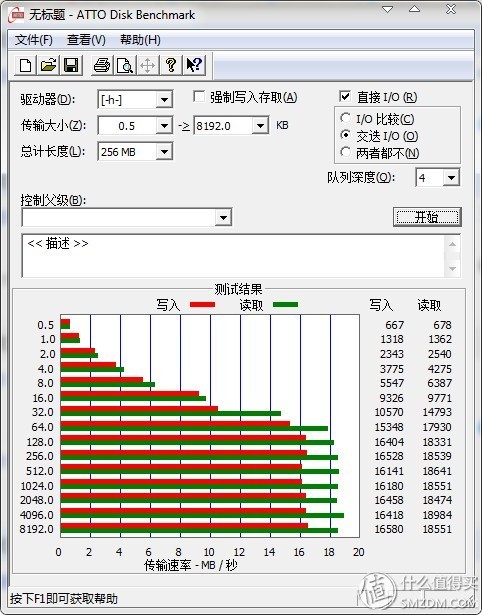 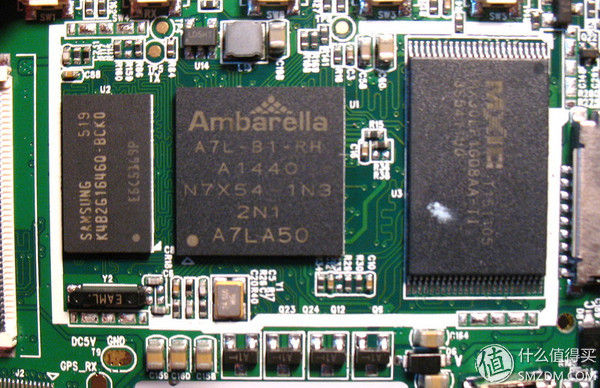 There is a thread on the lens to adjust the focal length. After the factory is adjusted, it will be sealed, and the user cannot adjust. 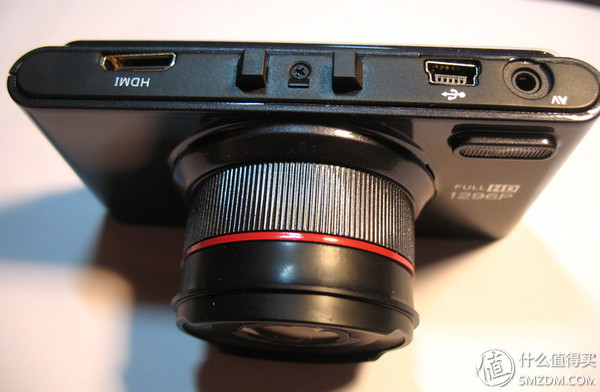 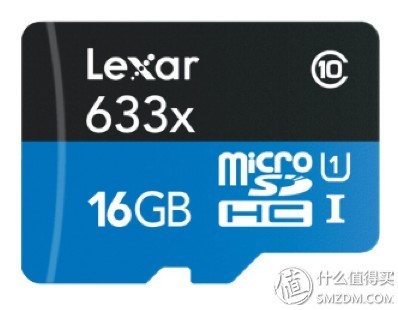 The lens is described in the introduction of the F2.0 large aperture, 170 degrees wide angle. The imaging quality of the glass lens is still transparent but because the diameter is too small to see the near-distance object, the distortion is quite powerful: 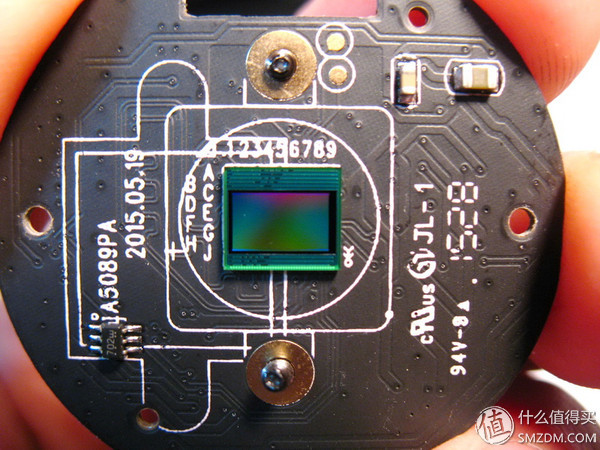 The core protagonist debut, driving recorder’s retina, is introduced is the US OV4689 CMOS photosensor chip, the parameter is 4 million pixels, the maximum video resolution of the recorder is 2560 × 1080, also supports 1296P video, chip vendor parameters Also high is 2688 × 1520, the performance is really strong:

The sensor chip has not been encapsulated (see a layer of protective glass on the wafer surface), and the wafer is cut directly on the board with the BGA process (should be called a COB package):

The colorful colorful silicon chip is my favorite, and the picture is playing frequently destroying the IC package to extract the silicon wafer, put it as a satellite photo. 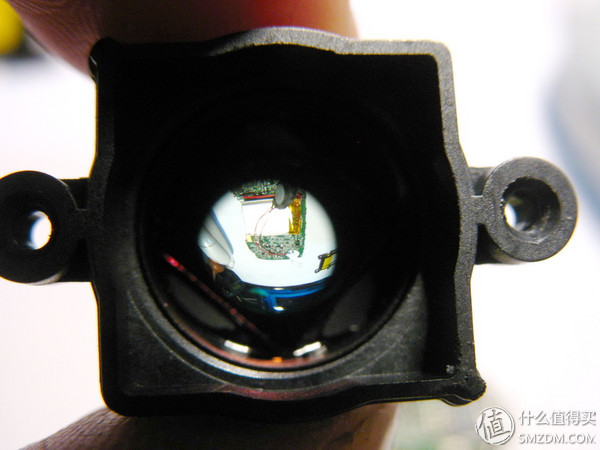 The actual measuring chip is about 6.5mm long and 5.5mm wide. The sensor has a size of 1/3 inches, which should refer to the photographic effective zone of the chip.

There are 6 hollow openings on both sides of the front outer casing. Perhaps it is for chip cooling: 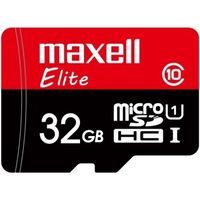 I am afraid that I use a sponge to block these openings, which can both dustproof does not affect air circulation, and do some small improvement work is not white. 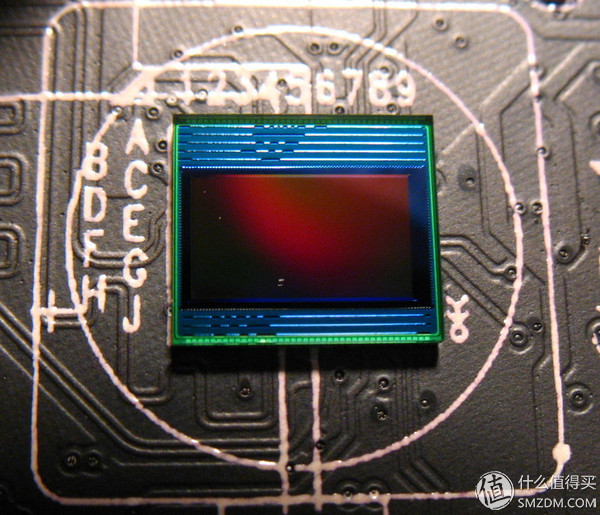 1. Advice: Do not try to dismantle this low-end electronic product, fixed to the screws on the plastic shell, basically smooth after screwing once.

2, the driving recorder fully reflects the craft standards of Shenzhen cottage electronics, the workmanship, does not pay attention to details, but the product can still be used normally (as an example of this product, at least one or two years). But in the price of two or three hundred yuan, this kind of work can be accepted.

3. It is estimated that the material and processing cost of this driving recorder is around 180-200 yuan. The price is about 300 yuan, deducting R & D and transportation, sales and after-sales cost, profit is extremely thin, if I am a boss, this product is unwilling to do in the current market. Because such a low price, you have to make money. But you have too many spare goods, because the chip is so fast, and it will be accumulated in the goods. 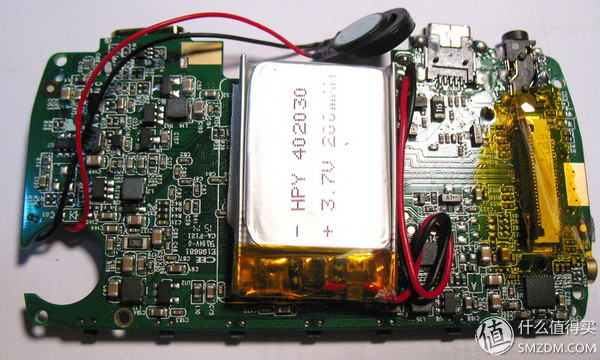 4, when I study the internal map of other brand products, I found a brand BL950 model recorder’s motherboard and the one of my demolished, so explained that some of Shenzhen’s partial driving recorder factory is a male model motherboard, that is There is a special company sells to various brand vendors after mass production of mature schemes, and then brand vendors are only responsible for purchasing these mass production modules, so that most of the R & D and commissioning costs are saved, which greatly reduces costs. . This is a good way to coordinate cooperation in the industry. This explains the second point described above. What is the model of the Shenzhen electronics industry to be in operation?

5, from more than ten years ago, the price of three hundred hundred black screen MP3, or thousands of yuan of color screen MP3, to the later MP4, from the cottage mobile phone to the cottage smartphone and cottage tablet, then now only Sale of two or three hundred Qian Shanzhai driving recorder, Shenzhen’s electronic manufacturing company experienced generations of products more products, and a wave of industrial rise and fall, the complexity and manufacturing process is growing, while sales The price is getting lower and less profit, and the low-end electronic manufacturing industry in Shenzhen is really increasingly sad. I can’t help but think about it. Where is the way out of this industry and the future direction?

Finally, the speed test of the recently started TF card, using Kawaguai’s little reader test, the USB2.0 port of I3, does not represent the true performance of two cards, for reference only: 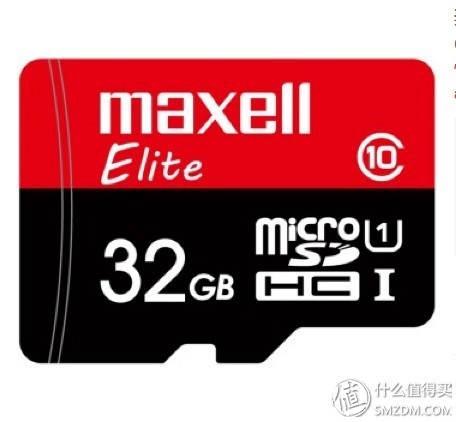 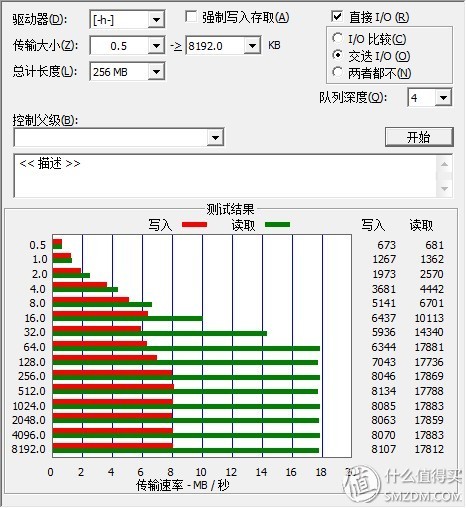 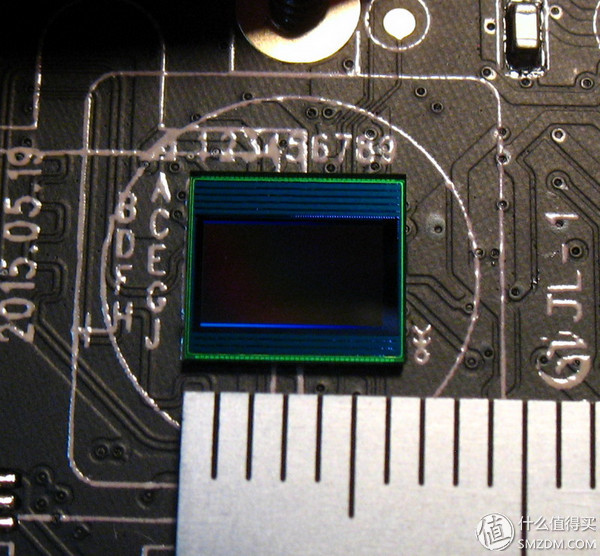 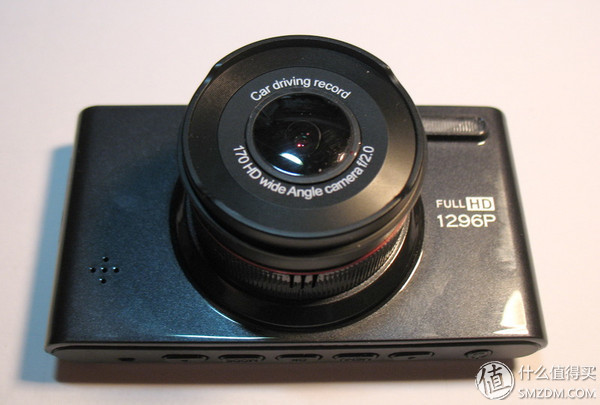 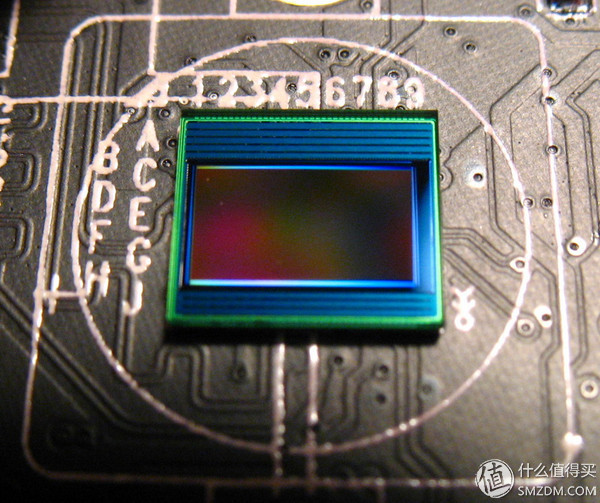