From the quietly pad “Inner increase” to wearing “men’s high heels”, the heart of “love beauty” is becoming more and more brave. On August 14th, a reporter from the Sanxiang Metropolis Daily found that at present, the “high heels” of 3 cm-5 cm on the Changsha market are quietly popular in the trendy men’s shoes store. In this regard, most male consumers who are interviewed said that as long as they are not “fine heels”, they are not completely unacceptable.

There are more “men’s high heels” in the market, and the trendy style is popular

On August 14th, in the red dragonfly and Aokang men’s shoes brands such as Walking Street, Huangxingnan Road, Changsha City, the reporter from Sanxiang Metropolis Daily saw that it is different from the past men’s shoes style. They have thickened a lot, and some of them have “thick heel” styles. These “thick heels” are different from the “thick sole shoes” that have been popular in the early years. They are not the thickening of the entire soles, but the thickness of the heel parts.

At the Berlon Men’s Shoes counter, a pair of autumn business men’s shoes with a price of 329 yuan is about 3 cm high. This height is almost the same as that of some ladies’ leather shoes. In addition, there is also a men’s leather shoes with an inner increase in insole in the store, which only increases the thickness of the insole of about 4 cm, which is not the height of the heel. The staff in the store said that at present, there are not many “high -heeled” leather shoes for business men.

In a store located on the second floor of the animation SKY, a specialty tide shoe named “Learn”, the men’s shoes sold are basically thick bottom. The reporter noticed that the thickest pair of shoes “thick heels” plus nearly 6 cm increased by nearly 6 cm. The height has exceeded the height of the high heels of 5 cm high heels.

Mr. Chen, the owner of the shop, introduced that you are generally young men who buy such “tide shoes”. They are thinner than those with thick bottom leather shoes, which can increase and proportions.

In addition, the reporter searched on an Internet shopping platform and found that with “high heels” and “men’s shoes” as keywords, the results obtained more than 100 pages. Among them, brands such as Aokang and Zhuo Gaole have related products on sale, and the price is about 300 yuan.

Among them, a pair of products named “Spring Fashion British Leather increases men’s shoes”, which has sold nearly 50 pairs. According to the customer service of the store, the height of this shoe’s “increase” height is 5 cm, which is a more trendy “British style”. The height of the other pointed thick heel also reached 4 cm.

Observe the embodiment of social equality, everyone who loves beauty

The merchant began to “silently” to launch high -heeled shoes. How did consumers respond to this?

On August 14th, Liu classmate Liu, a bachelor’s journalism and dissemination, said that at present, there are not many boys wearing high -heeled leather shoes in daily life, but in some special occasions, for example, when hosting the party, they will consider If you need to increase, you may wear a thick leisure shoes directly. “

Mr. Zheng, who bought a pair of men’s leather shoes with a height of 5 cm height in July, believed that his 42 -yard feet were equipped with 5 cm heel shoes, “very good and very tide”, he also hoped to increase another increase. Just a little. And under the sales page of another brand of men’s high heels, the male consumers named “XX Lei” bluntly said that this kind of thick -bottomed high heels “look very temperamental.” 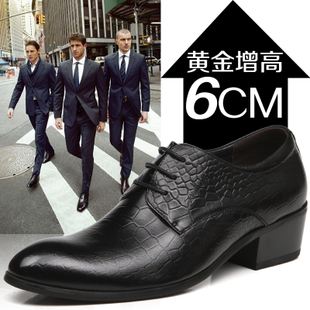 The reporter from Sanxiang Metropolis Daily noticed that although men’s high heels are almost the same as women’s high heels, they are still very different in the design of the heel style. For example, women’s high heels are mostly slender heels, while men’s “high heels” are thick and wide, mostly the shape of four or four squares, which does not affect the “masculine qi” that male consumers care about.

Public information shows that the description of high heels in history can be traced back to the ancient Egyptian period, and Persias became popular in the 15th century, mainly worn by horsesy men, because “wearing high heels can help to better balance, and more will be more. Put your attention on pulling the bow and putting arrows “.

There is also another saying that the popularity of high heels is because when male nobles are riding on horseback, they can ensure that some dirt and other dirt will not be stained on the upper. In addition, men can make men have high heights enough, making people look prestigious, and can give their opponents a deterrent.