The exquisite Buddhist statue than Longmen Grottoes, because in a small place, is not well -known

The Gongxian Grottoes was built during the Emperor Xiaowei of the Northern Wei Dynasty (AD 471-499). It has a history of more than 1,500 years. It is the three royal caves of the Northern Wei Dynasty. The temple was originally known as Xi Xuan Temple. After many evolution, it was changed to Jingtu Temple in the Tang Dynasty. Later, because it was mainly characterized by the statue of the grotto, it was changed to the grotto temple during the Qing Dynasty.

When the temple was first built, the scale was very spectacular. It consists of three large temples and two small temples to form a temple community. The Daxiong Treasure Hall and the two -side rooms that are seen now are a group of buildings built in the Ming Dynasty. During the Qing Dynasty, they were repaired. The hall was dedicated to Shakyamuni, and his two disciples Gan Ye and Ananda were on both sides.

This mountain is a section of Laoshan. It is called Dali Mountain. Most of the mountains are soil. There is only a stone under this Tuchan in Gongyi, which is particularly amazing. There are five caves, three cliff statues, a thousand Buddhas, more than 70 Buddha statues, and more than 200 inscriptions. Although the scale is a little smaller, three major boutiques have been preserved, including the national treasure -level cultural relics “Emperor’s Emperor Buddha”, dancing “flying sky” and exquisite “Lotus Altari”. 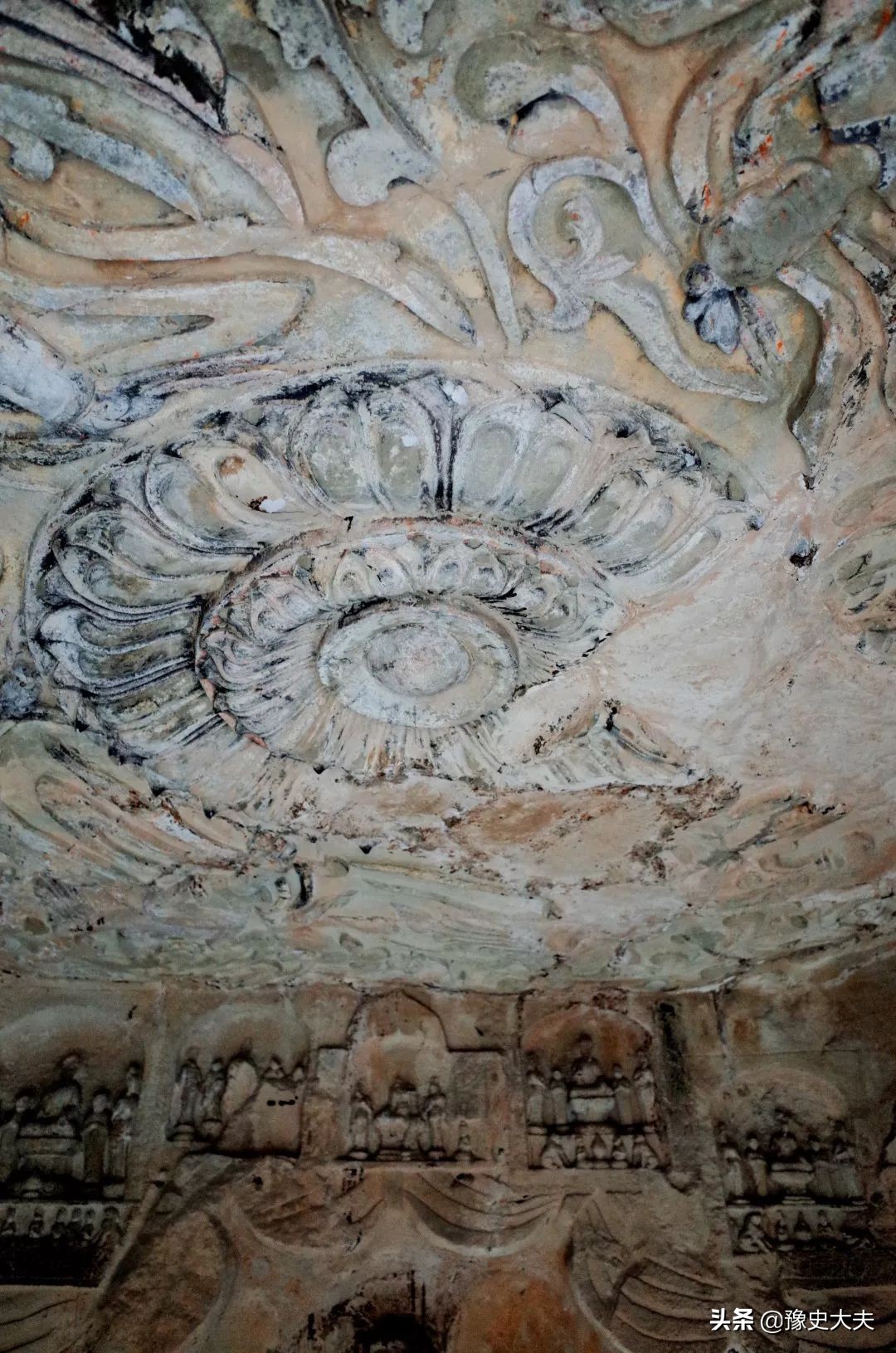 Gongxian Grottoes carved in the Northern Wei Dynasty Xuanwu Emperor Jing next year, around 500-503 AD, and it has been 1,500 years ago. The first cave is the most complete and most exquisite carving cave in the Gongxian Grottoes. The cave is square in the cave, and the length and high are 6 meters. 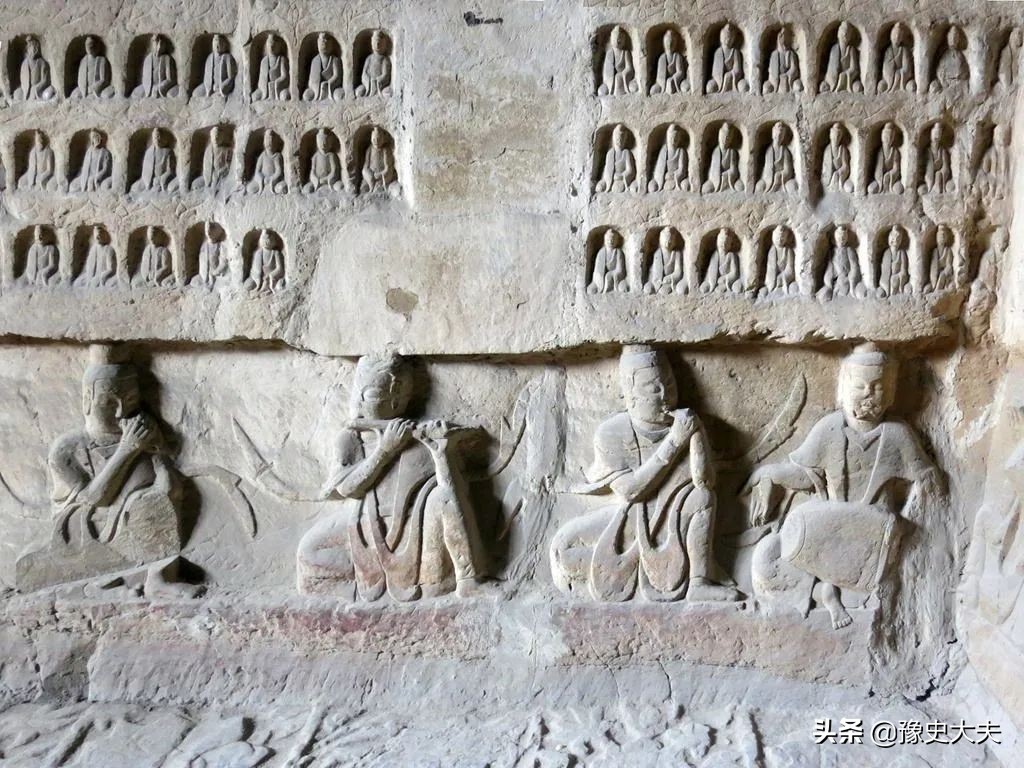 The central pillar in the cave is a unique place in the Gongxian Grottoes. It plays two functions. One is that the stone is yellow sand rock, small hardness, and the central column can prevent the industry; the other is to increase the carving area. The central pillar is carved with the Third Buddha in the Fahua Sutra, which is the past Buddha, the present Buddha, and the future Buddha. What we see on the face is Shakyamuni. You look at its face, quiet expression, the whole face portrayal and its clothing all present the characteristics of the Han Dynasty’s clothing thin belt, especially the clothing of the Buddha’s seat. The engraving of the early small round knife was engraved very smoothly and elegant. Below the Buddha’s seat is a pair of protection of Buddhism, the surface of the base is Lishi and the King of God. The backlight of the Buddha statue is engraved with flame patterns, symbolizing light, and both sides are symmetrical lotus and flying sky.

When you come to the Gongxian Grottoes, you can see the excitement of the grotto on the south wall. It reflects the prevalence of Buddhism during the Northern Wei Dynasty. The emperor and the queen came to the temple to worship the Buddha. The formal form of high reliefs vividly reproduced the grand scene of the emperor and the Buddha.

After the earliest appeared in Binyang Zhongdong, which was first appeared in Longmen Grottoes, after being stolen by imperialists in 1935, the emperor’s queen Buddha in Gongxian Grottoes became an orphan at home, which can be called “national treasure”. The grotto exists 18 pieces, and 15 are preserved. This is the most exquisite.

The most valuable is the color above, including black, yellow, and red. Although it has been preserved for more than 1,500 years, the color is clear. What kind of pigment is used for this color, how to apply it, and why can it be preserved to this day , So far, it has been unable to identify it. In 1996, China just issued a set of stamps. China participated in this group of emperors, a statue of the emperor, and eight attendants. In the queen’s ritual Buddhist map, Bhikkhuni wore a previous walk, and the queen wearing a lotus crown led the princess concubine. You see, these statues are graceful and luxurious, with all the instruments, some of the maids hold the sacrifice instruments, some of them are shirts, and some are holding an umbrella, and they slowly walk towards the Buddhist temple with Huangdi.

The second cave and the first cave were excavated at the same time, but after the central column was carved, it collapsed because of the stone problem, and was stopped and abandoned. What I see on the face is the folk statue of the Tang Dynasty. On the east wall, there is a work of the Northern Wei Dynasty in the late Eastern Wei Dynasty. The sculpture is the most exquisite, especially the curved pattern used by the clothing pattern hanging on the Buddha, which is more unique.

There are forty small nibs on the back pit, twenty -one inscriptions. It was discovered when the staff cleared the accumulation in 1977. Most of them were inscribed during the Northern Qi Dynasty. There were three travel notes of Song people.

Buddhist altar on the outer wall of Gongyi Grottoes

The most noticeable thing in the third cave is the pair of flying sky on the center of the center. It is the most exquisite pair of carving in the cave temple. The cover of the “Chinese Art Encyclopedia” is the most east side of Feitian. Feitian originated from ancient Indian Buddhist classics. It is a free and happy god of heaven. It is the servant of the Buddha. This pair of flying body is slender, the tulle is transparent, and the ribbon wounds from behind the neck to the front of the shoulder and fluttering backwards. She holds the lotus with one hand and holds the lotus bud with one hand. A strong sense of flying, the flying straps and the flowing cloud pattern form a perfect picture. 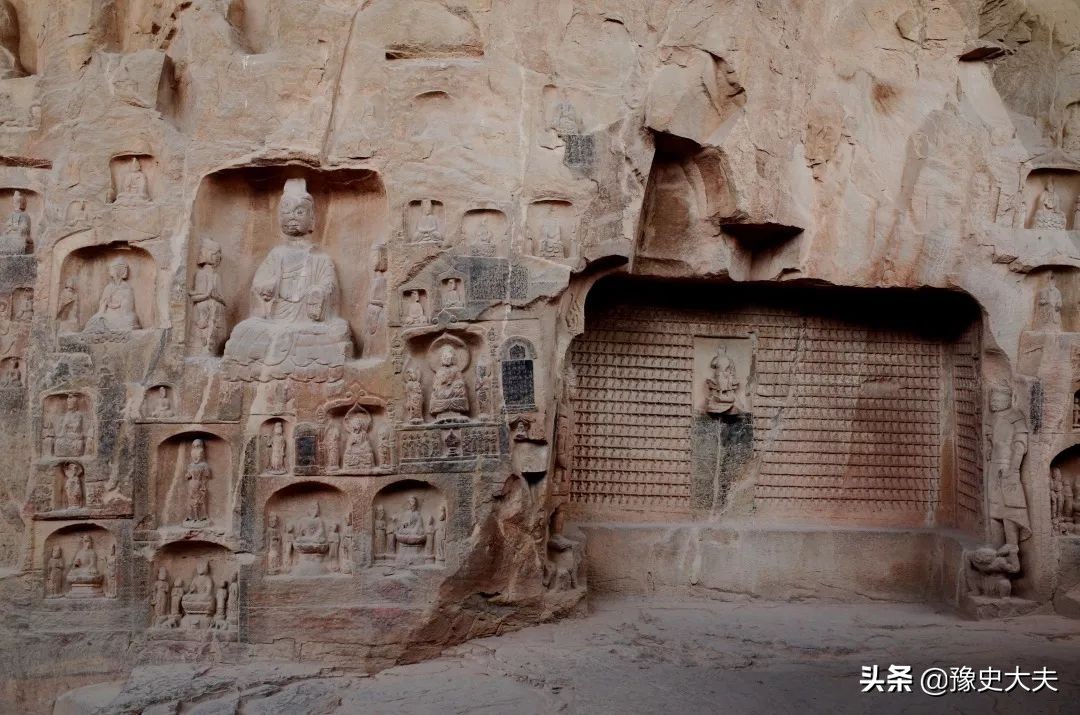 The wall of the east -west wall is the carving of the musicians, like a large national symphony orchestra. They hold different instruments in their hands, including flutes, Sheng, 竽, Heng Flute, 箜篌, and Drum. There are musical instruments in the middle of the native, as well as instruments of ethnic minorities and foreign countries. Many instruments in real life are no longer visible, but It can also be seen in the grotto’s shape and performance method.

The foot of the north wall is a monster. Monsters often appear in the tomb of the Han Dynasty. It is a beast that avoids evil. What is it connected with Buddhism? It is necessary to further verify and study experts. 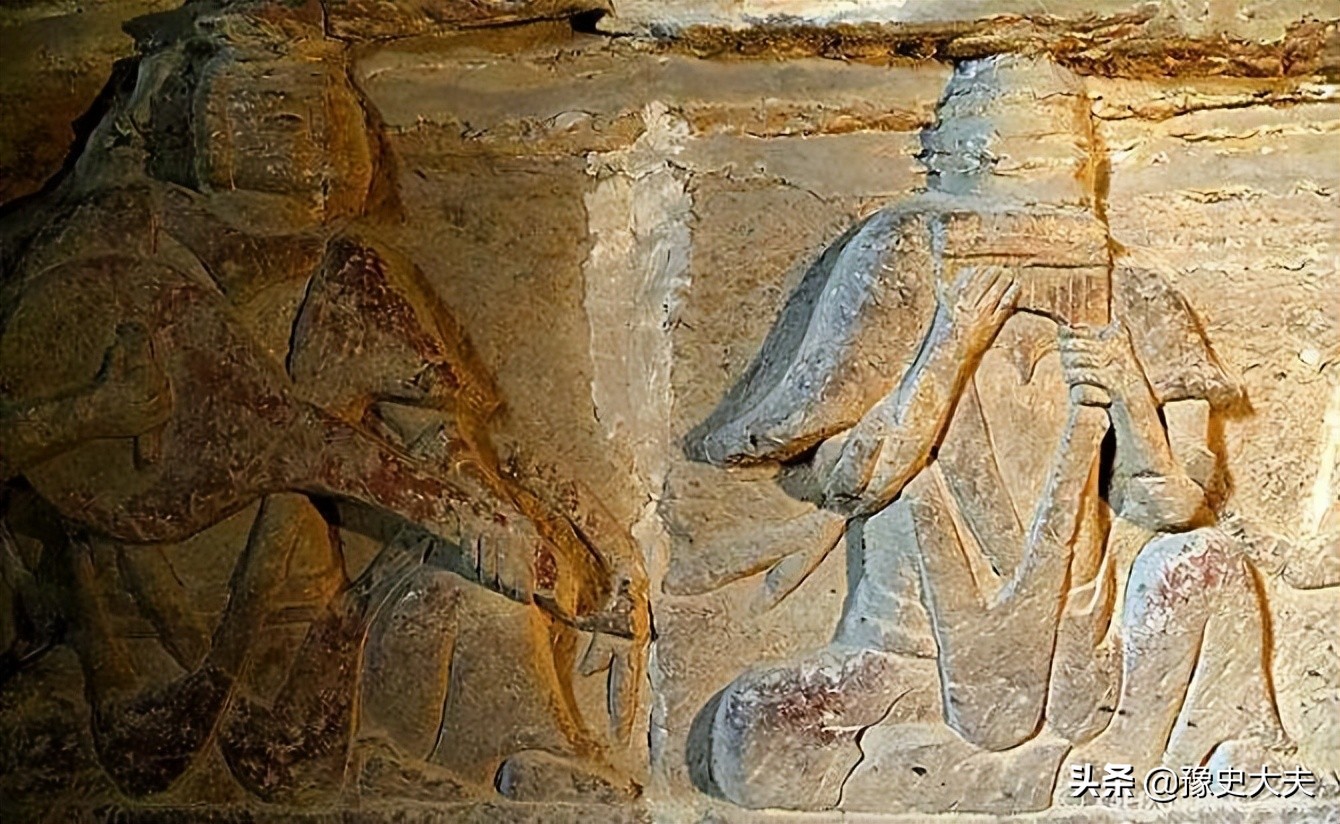 On the surface of the base is the carving of the god of God, that is, the legendary king, such as the King of Water, King of the God of Verities, King of Tree God, Double -sided God King, etc., carved on clothes and looked like the clothes. In the sculpture of the King of God, the two -sided god king carved the most exquisitely. It is two faces of a person, on the one hand, a male face, a square face, a woman’s face, and the face of melon seeds. A complete image.

The top and ground of the fourth cave are symmetrical lotus, Feitian, and Huayan patterns. In order to protect the ground sculpture, you can watch it through the guardrail.

On the outer cliff wall of the Siche, there is a small niche during the Longshuo period of the Tang Dynasty, commonly known as “Xiaofengxian Temple”. The second bodhisattva and the second heavenly king are 12 tricks, but according to the calculation, it may be its blueprint more than ten years earlier than the Fengtian Temple in Longmen. The following is the “Stele of Emperor Wei Xiaowen’s Hosts Xuan Temple”. According to the inscription: “Emperor Xiaowen sent Jinshan, Tuyao Yusai, bending the arc and looking at the moon, controlling the horses to chase the wind, electricity to Yixi, Yunfei Fei, Yunfei Fei, Yunfei Fei, Yunfei Gong Luo, Ji Zhi Si also created Galan. ” It is clearly pointed out that Xixuan Temple was built by Emperor Wen of the Northern Wei Dynasty. Then I talked about the rebuilding, indicating that the Tang Dynasty Grottoes Temple was booming again. 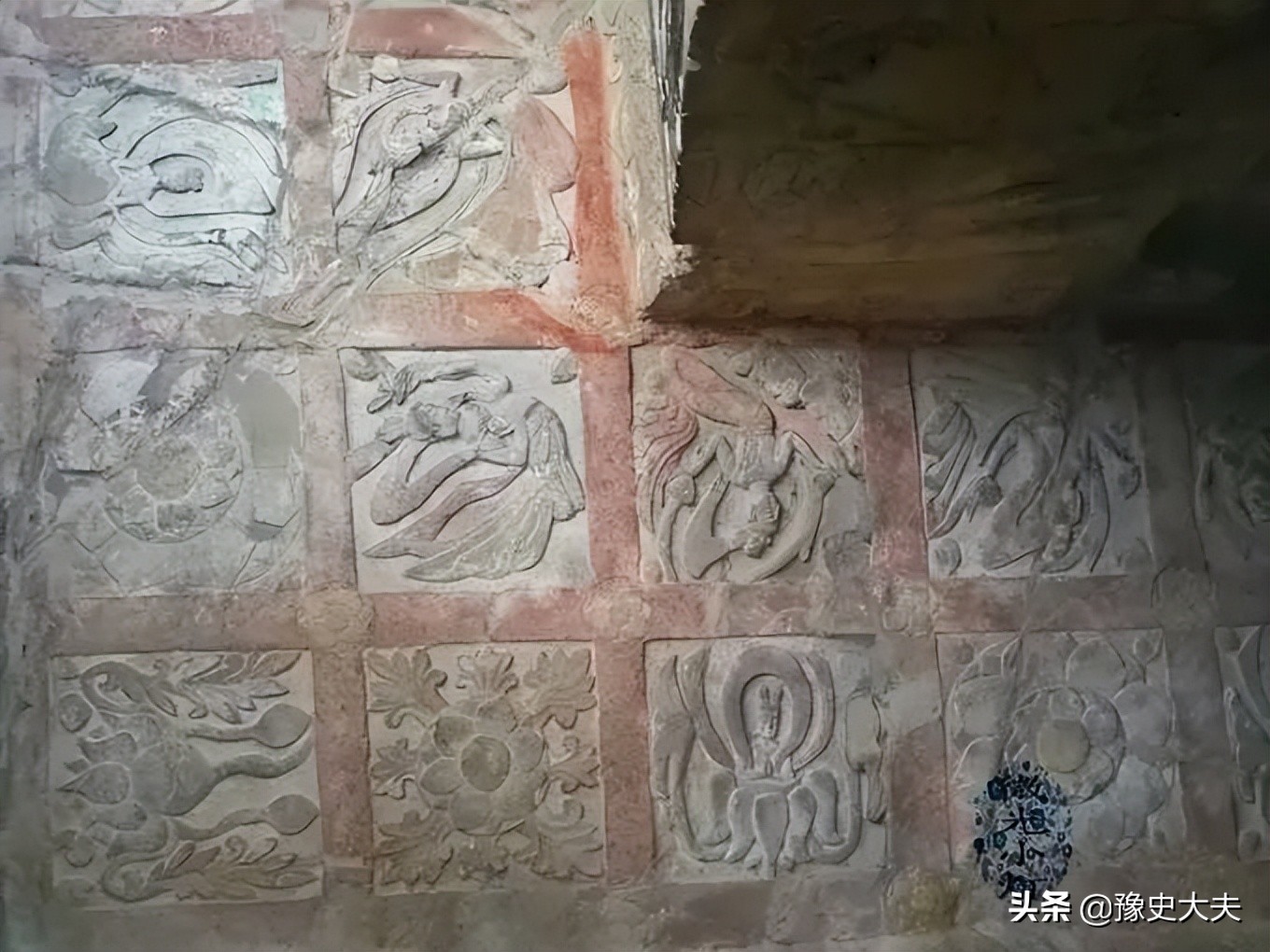 Because the fifth cave is small, there is no central pillar in it. The most worthy of the cave top lotus algae well. In the middle is a large lotus flower in full bloom, surrounded by six -body flying lotus around the lotus, the four corners are chemical patterns, the composition is unique, carved carvings, carvings, and carvings. Exquisite, it is said that the sunflower top of the Great Hall of the People in Beijing is designed according to this lotus top. 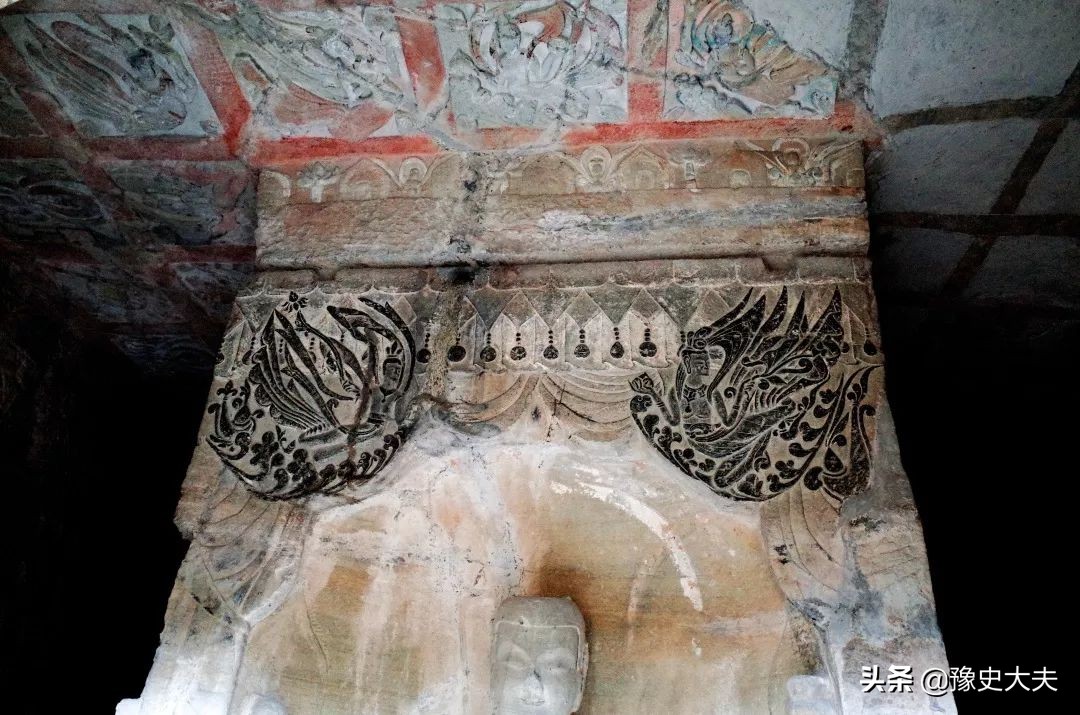 The eastern side of the Grottoes Temple is the thousand Buddhas, and it is the work of the Qianfeng period. It is said that Wu Zetian ordered at the same time at the same time in Longmen and Gongxian Grottoes. There were 999 small Buddhist altars around. The statue is exactly a thousand, so it is called Qianfo. The most unique thing about this nipple is the best -filled king statue in the middle. Now most of them are sitting on the legs and barefoot. Sitting on the whole table like this, the legs are naturally drooping, the shape of the feet on the lotus seat is on the lotus seat. It is rare now. It can only be seen that my country can only be seen in teaching Huang, Longmen and Gongyi Grottoes, so it is also very precious.

Back to Hanyuan, there is a hole cave, and the inner wall is engraved with the seven -character poem of Hanli. The thin line draws Suzaku, five -headed birds, and three -tailed fish. It is the work of the late Eastern Han Dynasty. Slipping naturally, with a high level of imagination. From the Han Dynasty stone rollers show that before the grotto temple has not been excavated, the artist’s footprint has been existed here.

Buddhist altar on the outer wall of Gongyi Grottoes